I am so relieved to say that I won the 2017 Oregon Motorcycle Road Racing Association Formula Ultra Championship. It took six race weekends and twelve races to determine that. It came down to the last race of the year, in the most dramatic fashion!

I started out the year strong, taking wins in Formula Ultra convincingly. Since that first round, a cloud of bad luck casted itself above me causing electrical problems at round 2, and a blown motor and mechanical leading to 2 crashes at round 3 of the series. In the midst of losing my best friend Kelly Johnson at round 2 in a tragic racing accident, needless to say it was a tough time for me.

But that cloud passed as I came into round 4 of the series with a fresh bike looking to turn my luck around. I went on to win both Formula Ultra races just like I did at round 1. It had been since then that I won in the premier class. It felt like it had been forever since I won, so long that I almost didn't believe I could win anymore after all that I had been through in a short amount of time. But I did win, and nobody could touch me that weekend. I turned my best laps of the season, and really felt comfortable on my Yamaha R1 at Portland International Raceway for the first time.

I came into round 5 with confidence, looking to pick up where I left off last round and get some wins. I came into the weekend 2nd in points to Chris Ancien, my rival for the #1 plate this season. I had made up a good chuck of the points deficit at the last round, and I was looking to keep chipping away. I did just so with a 2nd place finish in Formula Ultra on Saturday behind Devon McDonough, the reigning OMRRA champ. Ancien finished 5th, and I was only 1 point behind him in the championship standings now. Devon and I were on another level, flirting with lap times in the 1:05's. Devon turned a 1:06.0 lap time, and I was just a tenth behind. But disaster struck in my last race Saturday when my R1 engine failed yet again! I was forced to ride my old 2007 Suzuki GSX-R1000 that had shifting problems. The same bike that had a mechanical and caused me to crash at round 3. Needless to say, I was terrified and absolutely gutted thinking my championship hopes were once again ruined. I had to ride the bike at 80%, which was hard to do when all I wanted was to give it 100% and fight for the win. Riding that Suzuki at 80% was still faster than me riding my Yamaha R6 around at 100%. I had to accept that I couldn't race for the win, and I would have to fight 4th or so and take the points I could get. I did just that, fighting with Kevin Pinkstaff for 4th position. Halfway through Sunday's Formula Ultra race, I couldn't believe my eyes when I saw Ancien crash out as he fought for first. All he really needed to do was finish, and beating me would've been easy as I limped around the track. I immediately accepted 4th, Pinkstaff pulled away and I cruised to the checkered flag to take some points and the championship lead by 9 over Ancien. What was almost a bad weekend for me, turned out okay in the end.

Going Into The Finale

This championship was far from over. I didn't have to worry about just Ancien. I had Ryan Sutton, Jeremy Coffey, and Kevin Pinkstaff all very hungry to get a win before the season was over. Everyone had something to gain, and nothing to lose except me. I had everything to lose. Saturdays Formula Ultra race was dry, and I was able to get out front for a couple laps before Ryan Sutton passed me. I've raced Ryan for years, and he's a FAST dude. It was his day, as I tailed him closely the entire race looking to make a pass. But Ryan had his bases covered, and I didn't want to get aggressive and jeopardize anything. I happily took 2nd, and extended my points lead from 9 to 14 points. I sat out Open Supersport (the race my R1 blew up in at round 5) because I didn't want to risk anything happening to my R1 for Sundays Formula Ultra race. The next morning, I took the R1 out for practice. Out of nowhere, the bike started cutting out. I would be on the gas, accelerating and the bike would cut out and stop accelerating. My heart sank. I immediately returned to the pits to explain to Eric my mechanic, and my Dad what was going on. After some deliberation, we thought it was the fuel pump, and we replaced it. The fuel pump that was in the bike definitely looked dirty and worn out, and we all felt pretty confident it was fixed. I even went out for a lap in a race I wasn't entered in just to make sure it was normal, and it was. 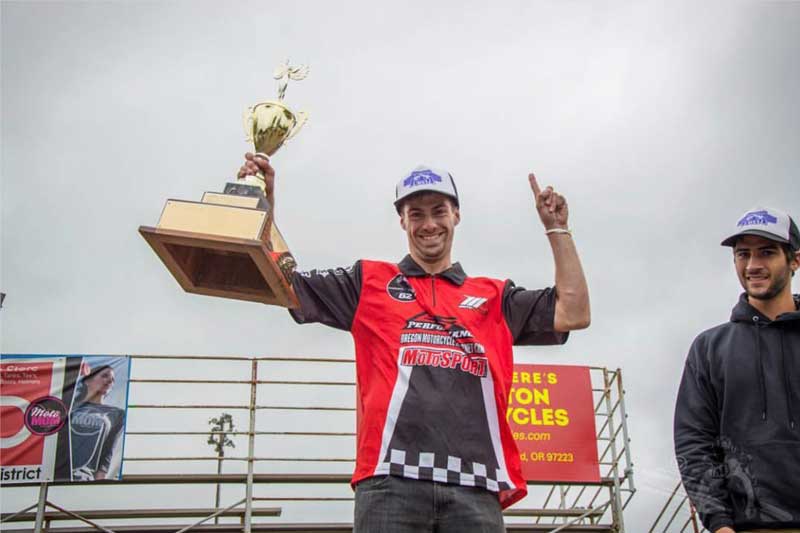 The weather began to change and rain was coming and going. I still had hours to wait for my race, and all I wanted to do was wrap up this championship. It would rain, then dry out. Then rain again. My mind scrambled all day with the possible scenarios. So much chaos ensued, that when it was time to race, I missed the warm up lap (not my fault) and had to start from pit lane with Jeremy Coffey who was also caught off guard. Only 5 racers showed up to the race, because of the threatening weather. The scenario with that little amount of riders is that Ancien would have had to win if I got last to win the championship. Nothing else but that scenario would give him the #1 plate. When the green flag waved and the race was off, we had a brief time penalty before Jeremy and I could leave the pit lane and join the race. It really didn't affect anything at all. I was still 3rd into the first turn, but I didn't have my new tires scrubbed in, and I was seeing the track for the very first time! It would've been super easy just to finish and get 4th, but disaster struck yet AGAIN and my bike began cutting out as I made my way onto the front straightaway to complete lap 1. It was so bad, I could barely even maintain 60mph and I went from 3rd to last in a heartbeat. Emotions overwhelmed me, but I kept riding and I would almost catch 4th place by the time I got to turn 4, but then 4th place (Tullio Celano) would pull away when we got onto the back straight. This went on for 2 laps, I was being teased so badly for that crucial championship determining position. Ancien was leading the race. I was then black flagged, and before I could make it back into the pits the bike died and I pulled off outside of turn 4 and 5. I had to watch the fate of this championship play out on the track without me. I thought it was over and I was in such misery and pain watching. I couldn't watch. Ancien was leading and rock solid. But then the rain came. Little sprinkles fell from the sky. I was basically laying on the grass on the other side of the track wall, but when I felt those drops, I got up to watch. A little glimmer of hope grew in me when I saw Pinkstaff and Coffey closing in on Ancien. A couple of laps later, Ancien was in 3rd and going backwards. At the time, I didn't know if that meant I was champion or not. All I hoped was that everyone would finish exactly how they were, and they did. I was able to ride my bike back into the pits, where I met my family, who weren't jumping up and down with joy to congratulate me. I was prepared for the worse. I was even more confused when Ancien rode over to my pits to give me a hug. I then asked that scary question. "Who won?" I was honestly in shock when my Dad said, "you did."

Everyone had ridden a pretty emotional roller coaster with me for that 25 minutes or so the race lasted, which would explain why everyone look as rattled as I was when I came back into the pits. But as soon as I heard my dad answer me, overwhelming relief set in. All the emotions of a tough year, losing Kelly, and fighting through all the adversity to win the championship poured out of me. Tears of relief and joy were shed. All I wanted was to win this championship and dedicate it Kelly. And I was finally able to do that!

About a half hour after that race, things settled down and I still had one more race to do. I had Open Superbike to race, and I was tied for that class championship. I had no R1 in race ready condition, and I wasn't going to race the Suzuki with shifting problems when the last race was going to be part wet and dry. So I went out on my R6 with rain tires. Everyone in that race took a gamble, because none of us knew if the track had dried from the rain it got in Formula Ultra and the race after. When I lined up for the race, I saw Jeremy Coffey, the competitor I was tied in this class for the championship with, was on his 1000 equipped with rain tires as well. But after we took the warm up lap, it was clear the track was dry. We were both on the wrong tires for the conditions, which was going to make for a very interesting race! When the green flag waved, Pinkstaff checked out in first aboard his 1000 equipped with slicks, the proper choice, and I was in 2nd. Halfway through the race, Tullio Celano got by me aboard his 1000 as well. At that point, I had a large lead over Coffey and was able to just have fun riding the rest of my race. And I did just that as I melted my rain tires away. I got 3rd and won the Open Superbike class championship to wrap up the 2017 OMRRA season.

I would like to give a huge thank you to Mike Colbach of Oregon Motorcycle Attorney for making this year possible by putting aboard a new Yamaha R1. I had been dreaming about racing a new R1 for a couple years, and Mike made it possible! It's been an honor to have him come on board this year, and I am very thankful for the level of support he has given me.

I would also like to personally thank Eric Dorn of EDR Performance for his dedication to my racing career. He puts in countless hours to prepare my race bikes, and he has spent countless days at the track with me for over 5 years to get me to where I am at today. Thank you Eric for your support. You are family to me and this would not have been possible without you.

Thank you to my Mom and Dad for bringing me up as a motorcycle racer, and for sacrificing so much so I can do what I do. I love you both.

Thank you to all my other sponsors for their part in this journey too:

10 years ago I was a novice racing OMRRA for the first time. 10 years later, I am the OMRRA #1 plate holder. Thank you to all my friends, family, and supporters for the encouragement this year, and years past!