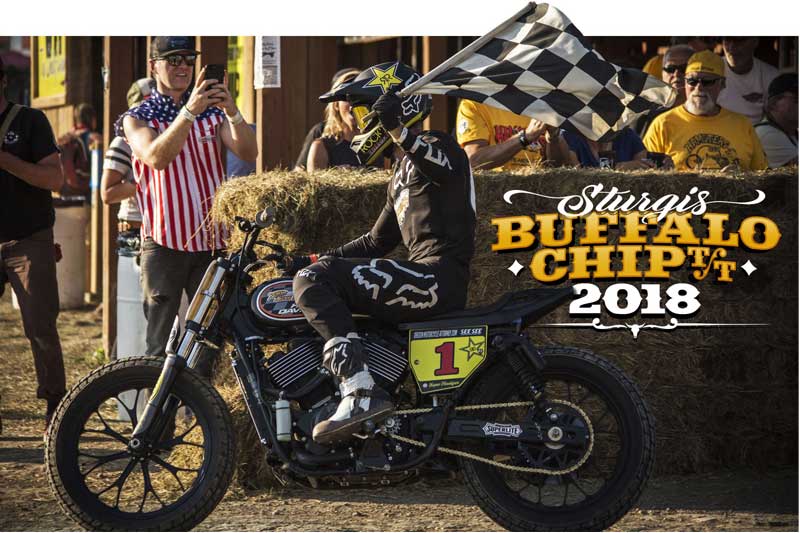 The 2018 Super Hooligan National Championship has been nothing short of amazing for me this year. Starting out the series with a win at the opening round at my home track in February was the perfect way to begin it. Winning once more on the See See Harley-Davidson Street 750 was awesome too! But ever since I got my new H-D Street Rod 750 from Latus Motors Harley-Davidson, I've kicked things up a notch.

9 of 11 rounds are in the books. I've been on the podium every race this year. Six wins, a 2nd, and two 3rd places. I couldn't have imagined anything like it, but I'm very grateful and I've worked very hard. The practice and preparation I've put in before every round has paid off, and I've been applying all the things I've learned over the course of the last two years flat tracking. My hooligan bike has been working amazing for me. I'm so comfortable riding the bike, and I think it shows. 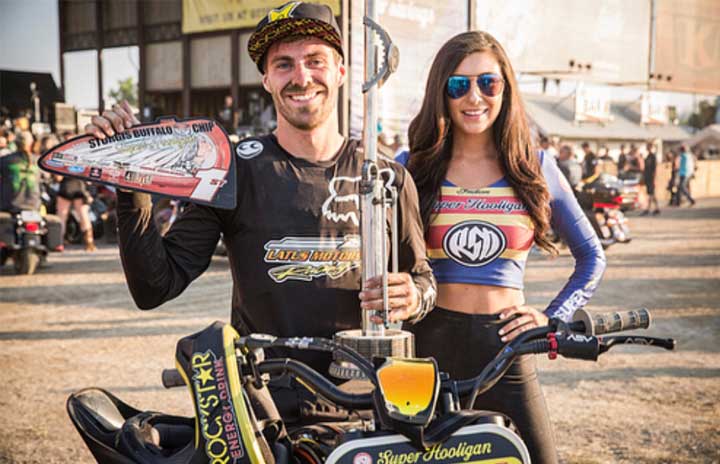 The last four rounds have been insane. It all started back in Sturgis at the Buffalo Chip TT round of Super Hooligans. I was by myself, with no help. That was pretty intimating for me, being so far from home without my Dad to help work on the bike and make sure everything was ready for me. I had to step up though, and do the bike work myself. After practice I realized my gearing was off, my shock setup was off, and my tires were off. In a short amount of time under high pressure, I was able to make changes to all those things to nail my bike setup. Everything I had learned I put to the test, and it worked. I won my heat race easily. I then won the $1000 winner take all Dash-for-Cash over former Grand National Champion, Joe Kopp. And I went on to win the main event after another close race with Joe. It was an amazing feeling to beat Joe. He's an amazing competitor and someone I study very closely. I've definitely learned a thing or two by watching him and racing with him! Winning that race was one of my career highlights. I proved to myself that I could win on my own. However, I'll still choose having my Dad or a team any day to be there for me. If things didn't go so smoothly for me, it could've been a total nightmare by myself. 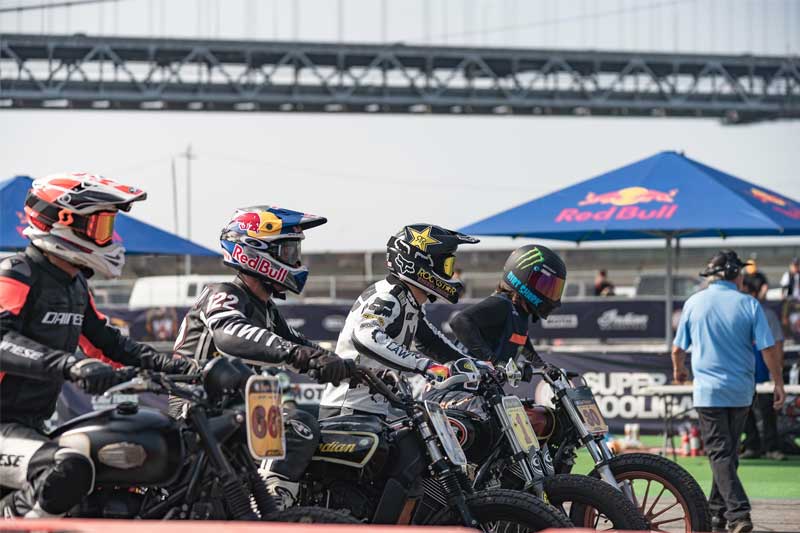 Next up was the first-ever Moto Bay Classic, a race on Pier 32 in San Francisco, California. It was an incredible venue with a huge crowd! I struggled all day, finishing 2nd in my heat race and not transferring into the Dash-for-Cash for the second time this year. My Dad and I worked on bike setup more than anyone, however. Changing shock springs, shocks, gearing, and tire compounds non-stop in the search for a bike setup I could race competitively with. 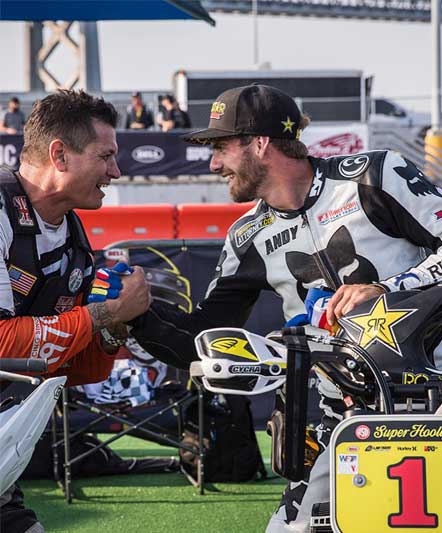 Normally we don't have to make major changes, but this track was on asphalt, throwing a major curveball at us. Somehow, after a lot of deliberation and trial and error, we nailed the bike setup for the main event. I also made a riding style adjustment. I got a good start, and found my way into 2nd place. I pressured 1st, and sling-shotted my way past into turn 1 with a few laps to go to take another win!

Round 8 of the series was held in Hanford, California at Kings Speedway. It was a pretty large flat track, and it was challenging too. I won my heat race, and had a good battle for 1st place in the Dash-for-Cash, just getting edged out of that. My bike was getting upset coming off the corners, making it really hard to ride at the pace I was trying to go.

A few shock adjustments were made for the main event, and when the flag dropped, it was me leading the 13 rider main event around. I immediately started pulling away. The shock changes were perfect and the bike was doing everything how I needed to make it three wins in a row! It was awesome to win on the biggest track we've rode all year. My 750 definitely doesn't have the grunt of some of the 1200's, but it proved itself at this race. 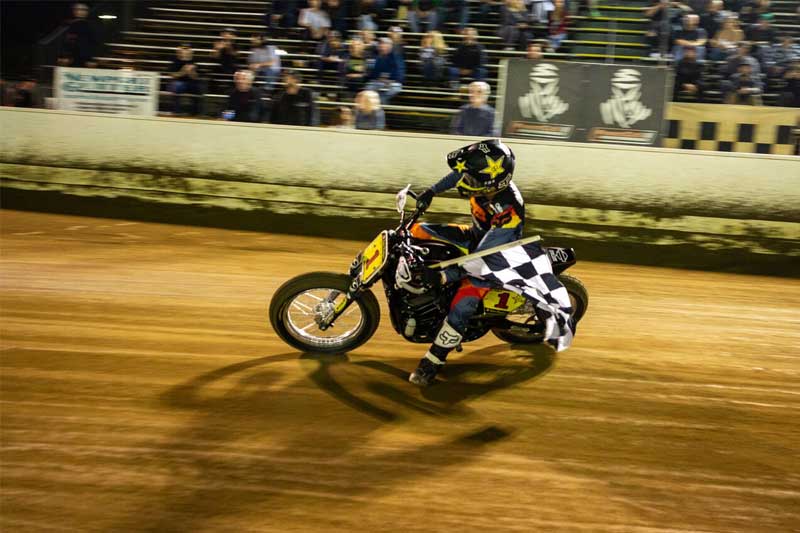 Most recently was round 9 at Costa Mesa Speedway in Costa Mesa, CA. This is a tiny little short track just miles from the beach, and one of my favorite stops. Once again, I was on my own this weekend fending for myself. I had base setup to start with from this track last year, and it ended up working perfect for me. I didn't make a single setup change all night! This round was a lot of fun because we ran a speedway format, which consisted of 3 heat races with no practice prior. Just straight to racing! Everyone has 3 heat races, which were randomly assorted with racers. 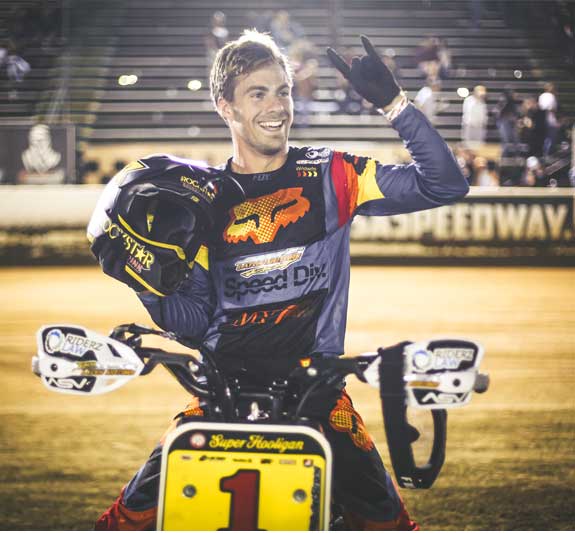 Each heat race counted for points, which then an overall score placed you into the main event, or a last-chance qualifier, as well as the Dash-for-Cash if you were top 6 overall. I won two of me heats and finished 2nd in the last by a hair. My score put me on pole for the Dash-for-Cash. I got the holeshot and was able to take home the $1000 after putting down 4 perfect laps! I was feeling the best I've ever felt on my hooligan bike. In the main event, I did the exact same thing. But the 12 lap race allowed me to pull a larger gap. Towards the end I caught lapped traffic and slowed down, but I still won by a solid margin. It was a blast all night sliding around Costa Mesa Speedway. The track made for fun racing and fun riding! With four wins in a row, I grew my points lead to 69.5 points going into the double-header finale at Huntington Beach, CA on October 27/28!

I am really looking forward to the Moto Beach Classic / Surf City Blitz! Racing on a track built on the beach is going to be incredible. Last year's event was nothing short of amazing, so it's exciting to hear that they are going to top that. My goal is to keep up the momentum I've had all year, and try to finish out the season on the podium every race and hopefully take home another win or two, along with the championship title! Everything is looking really solid, and I am very excited for this event. I have a lot of strong competition, and some people that are hungry to take me down, so it won't be easy! But I feel very confident in what I have going on right now. I'm just as hungry for those wins.

I owe a huge thanks to George Latus and Mike Stegmann at Latus Motors Harley-Davidson for all the support this year. The bike they prepared for me has been amazing, and I really appreciate everything they've done for me this year! It's been a dream of mine to race for a team, especially for George, for a long time. It feels good to be doing those guys proud and keep Latus Motors Racing involved in the racing scene.

Make sure to keep up with everything I am doing on Instagram and Facebook so you can see how the finale goes down! A blog will follow.

I am really looking forward to the Moto Beach Classic / Surf City Blitz!