Over the 14th and 15th, I went out to Salem Speedway in Salem, Oregon, for some flat track racing action!

The track is at the Oregon State Fairgrounds in an indoor agriculture building. I've been racing in this building for almost 17 years! When I was really young, my Dad took me out there to race Arenacross.

I've raced flat track at Salem a lot, so I knew what to expect, which was a heap of fast local pro's. The Pacific Northwest is a hot bed for flat track racing talent, which has surely rubbed off on me.

There are two classes a pro can race: 450 Expert and Open Expert. Obviously in 450 Expert, a 450cc motorcycle is the maximum displacement. Open Expert is open, but everyone just runs a 450 and its a second class to race!

I did well in the heat races, and made the Dash for Cash (4 riders, 4 laps, winner takes all) in both classes. I got two 2nd place finishes and had the speed to win, but unfortunately the winner jumped the start and race direction didn't enforce it. One of the races was clean, and of course that one I butchered the start, and slid into second on the last lap. They did enforce jump starts in the main after multiple people complained. 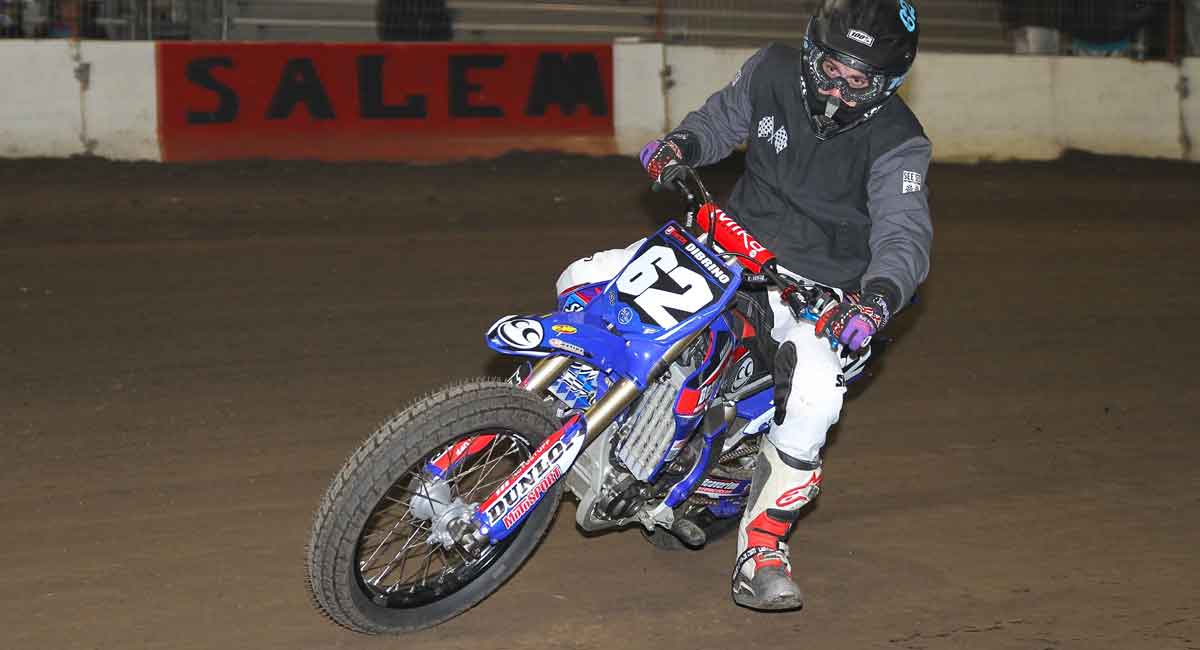 First main event up was 450 Expert, which is the video I posted. This was the 2nd or 3rd restart. One was for a jumped start, and the second was for a downed rider. I got the holeshot, and was able to pull out a gap on the field. It was about 27 degrees out, so the track was slick! I made sure to not over-ride the bike, and not make any mistakes. I executed the race perfectly and took home my first win of the season!

Second race was Open Expert. Once again I got the holeshot, and was able to lead about half of the race until I made a mistake. I got out wide in the corner where it was dusty, and lost a lot of momentum which allowed me to be passed. One little mistake, and I went from 1st to 3rd in an instant! I had fast guys chomping at the bit behind me for that last cash paying spot, so I was pleased to hold them off for 3rd and take home some more money!

Sundays races were great too.

Austin Helmholz, a local pro who has competed in AMA Pro Flat Track a bit the last few years was on fire.

We battled in a heat race, and both Dash for Cash races. He was able to edge me out, I think he had his bike working a little better. The first main event, 450 Expert, he got the holeshot and I followed. We pulled away considerably from everyone else. But he had me covered and I took 2nd.

In the last race of the weekend, Open Expert, I was more aggressive and learned from the first main event. I got the holeshot, and held my ground. It took until I bobbled coming out of turn 2 for Austin to get a drive to try to pass into turn 3. I saw Austin was coming in hot, and gave him room. I immediately squared the turn off, preparing to get the drive on him to pass right back. He slid in hot, and got out into the dust and ended up crashing. I narrowly missed him. After that, I cruised on home to another win. Not the way you want to win, but I'll take it!

I came out of the weekend $360 richer! Not exactly something to brag about; but to get to go out and race cool people whiling having fun, AND get paid, that's pretty sweet. That was a great weekend in my book. Even if temperatures were in the twenty's the whole time!