THE SWITCH TO KTM / BLOG

It's been a crazy couple of months. I've already traveled well over 12,000 miles and I am only 3 races into the 2019 Super Hooligans season! Daytona was a long haul to do alone. Texas was the most recent trip, and fortunately I had a friend help me out with driving on that one.

Though it may have appeared I had everything all lined up for this season, it's been as opposite of that as possible. Latus Motors Harley-Davidson and I agreed to not renew our deal for the full 2019 season. They were very generous to let me use their bike until I came up with my own.

So behind the scenes, I've been accumulating new sponsors and building an entirely new program around a new 2019 KTM Duke 790.

I am the very first person ever to ride a KTM in the Super Hooligan series! 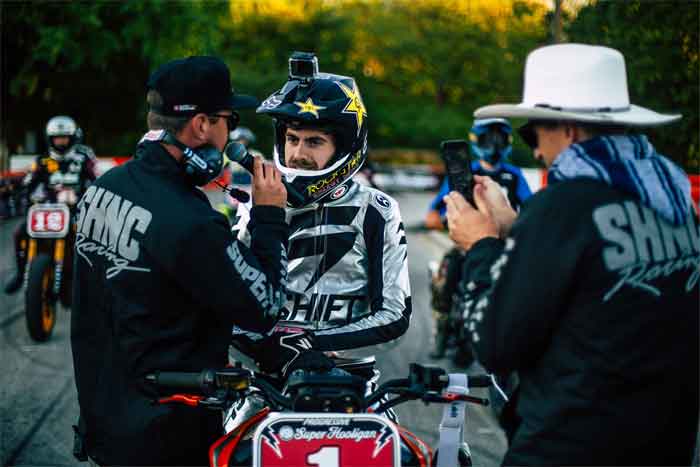 Travis Johnson at Savage Custom Fabrication in Tacoma, Washington, had been a huge resource to me.

He is in charge of the entire bike build. He's making all sorts of trick stuff to turn the KTM 790 Duke street bike into a deadly race weapon. Travis specializes in building custom flat track frames, so I knew he was the perfect man for the job. With this being a brand new bike, and being the first people to set one up for flat track, it's been no easy task and we are learning as we go.

MotoSport Hillsboro stepped up bigtime to give me a deal I couldn't refuse on the bike.

Once I found out about the 790 Duke, from Latus Motors actually, I knew it was the bike I wanted to race. After a couple years on the Harley's, I was ready for a change. The KTM makes about 100 horsepower in stock form! Which is a good 25 more ponies than anything I've had in the past. It also is very light, and will weigh in a good 65+ pounds less than my previous bikes did. Going from dual shock Harley's to a single shock KTM is exciting too. Everything about the bike is a step up in my opinion. It has me really excited! 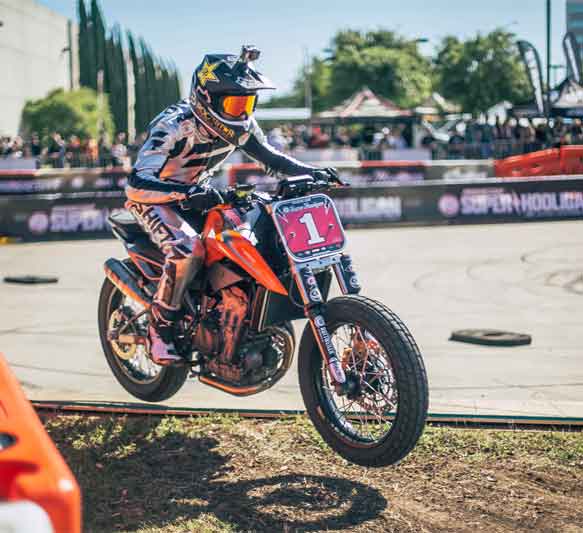 I already had a chance to race it at the Hand Built TT in Austin, Texas the other week. I got the bike at the last moment before I hit the road. I had to wait so late that in order to make it to the race on time, I had to drive through the night to get there. It was tough, but worth it. The new bike wasn't full finished. Savage Custom essentially got the minimum done in order to race it. I told Travis that I had to have the bike together after I found out the race was going to be on asphalt. So originally, the plan was not to race the bike in Austin. But Travis got suspension, triple clamps, wheels and a swingarm mounted to get me out with a solid bike. I rode it with the stock foot controls, tank, seat, sub frame, and handlebars. It wouldn't have been ideal for the dirt, but it was absolutely epic to ride on the supermoto-style course we had in Austin! I was fastest qualifier first time out with the bike, and I was battling for the win in the main event before my chain broke off. Unfortunately it was an adjustment error I made. One of the risks I ran running a new bike with zero testing. Not the end of the world though. Riding the new bike put a big smile on my face!

The bike is scheduled to be mostly complete for the next race in Perris, CA in just a couple of weeks. It's a big half-mile track, so I will get to utilize the power the bike puts out! Be sure to keep an eye out on my social media for "phase two" of the KTM build. It's going to look epic! Travis is building a new tank, sub frame, foot controls and more to make this bike as race oriented as can be. 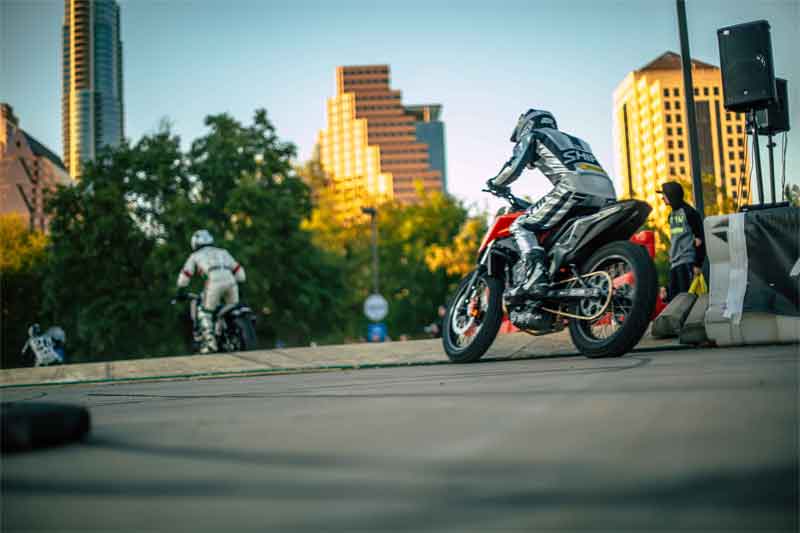