What a crazy busy last couple of months it has been since the MotoAmerica season has been! I've been in Georgia, Virginia, Wisconsin, and Washington racing the series, as well as racing locally with OMRRA and WMRRA. But finally, I get to break some big news, I got on the podium not once, but twice this last round of MotoAmerica in the Stock 1000 class at The Ridge Motorsports Park! 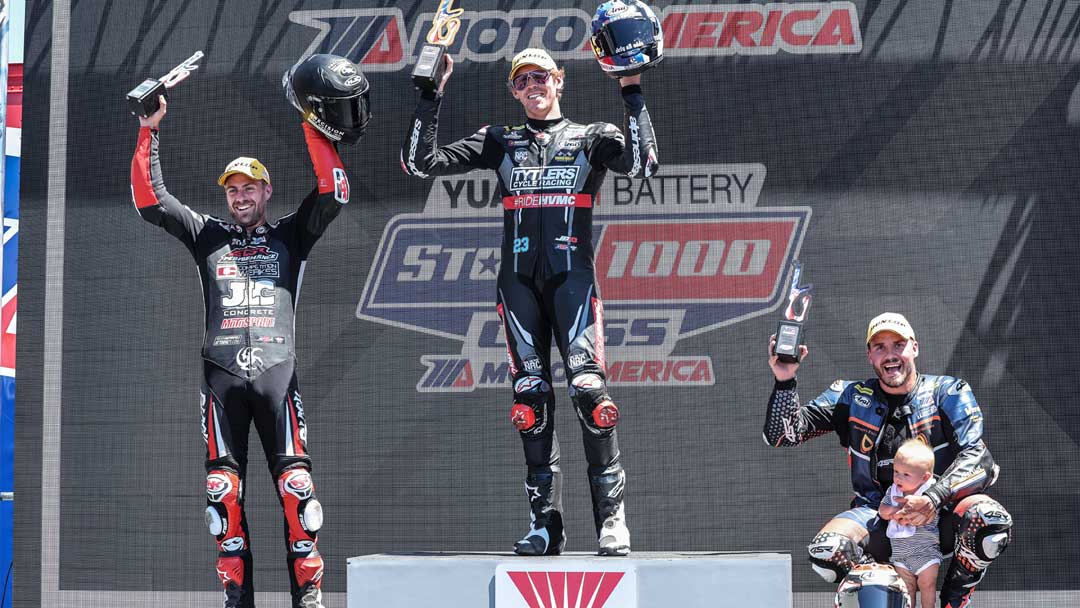 It has been since 2018 at Road America that I stood on the podium in this class. Ever since then, I've just missed it a few times. The Stock 1000 class has grown a lot since 2018, both in depth of field, but mainly in the level of competition. I'd argue it is the most competitive class in MotoAmerica, from the perspective of how many racers are in the class that can win or have won races. It for sure is the most elite class below Superbike now. Anyway, it has become harder and harder to get a podium. I was beginning to wonder if it would ever happen for me. I couldn't get the job done at my home race of the series in 2020 or 2021, so how was I going to do it in 2022 when the competition is at the highest level yet?

The weekend started out with practice and qualifying on Friday. I was 3rd quickest in practice, with a lap that I'd consider fast for a club race, but not MotoAmerica. Qualifying is always where people drop time, and we get to see who the contenders really are. We had a few interruptions in qualifying and I only got one fast lap in, right at the very end of the session that put me 4th quickest. I was a bit discouraged, but I felt good on the bike, so I couldn't be too hard on myself. 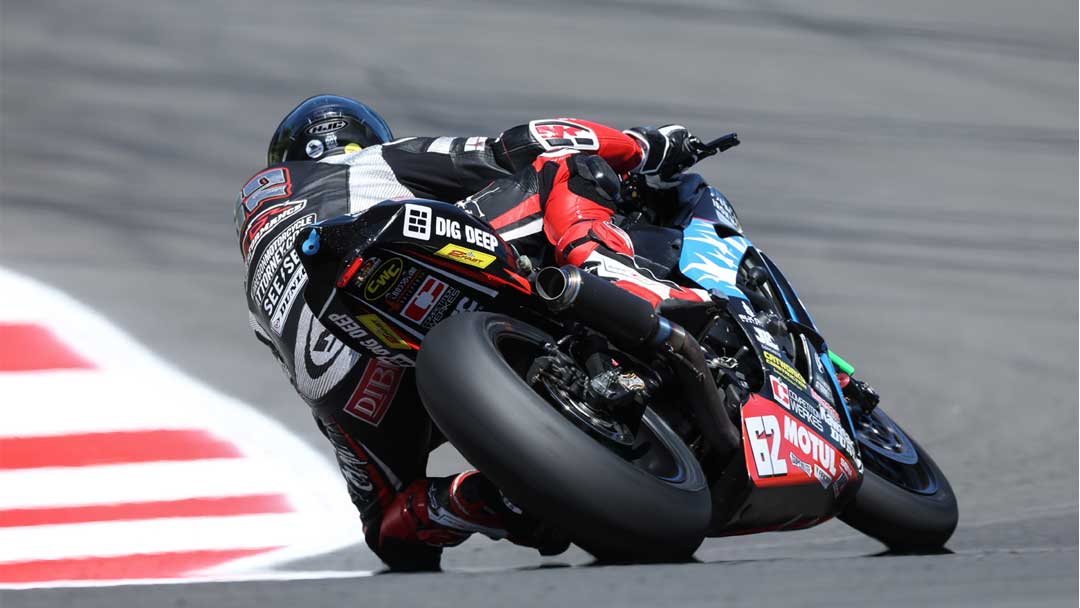 Fortunately, we always have a second qualifying session Saturday morning. I was fired up, ready to attack the track and get some redemption. I didn't want to settle for anything less than a front row start for the race at my home track. I threw down a 1:42.2 lap, my best ever, almost a second faster than the lap I turned last year in qualifying at this race! That put me 2nd fastest and earned me the 2nd position on the starting grid. My team and I were ecstatic! I out qualified some real heavy hitters. I was kind of surprised, but also not because I truly was feeling great this weekend and a lot of hard work I have been putting in felt like it was paying off. The best part is I have been able to qualify well and turn these fast laps by myself without needing a tow. I got the speed!

Stock 1000 Race 1 was up just a couple short hours later, and the nerves were high. The pressure to perform at my home round was on my shoulders. I got a good start and chased Corey Alexander down as long as I could. With a few laps to go, he had a comfortable lead, and so did I over 3rd place. Though I started losing grip and made a couple mistakes when I noticed the gap I had getting smaller over 3rd place. But time ran out and I kept my focus, dug deep, and brought it home to 2nd place and my first podium of the season in Stock 1000! Emotions ran through me on the cool down lap. I was so happy to finally get the job done and doing it in front of my home track fans, family, and some of my sponsors was surreal. I took the lap slow so I could wave to everyone and soak it all in. Pulling up to the podium, I was greeted by loud cheers and my team who were just as excited as I was. I got to do my interview and be announced onto the stage to accept my trophy. This was the moment I was dreaming of for years! Especially since MotoAmerica started coming to The Ridge in 2020. It felt great to prove to myself I could do it, and to show everyone I could do it at my home track. You could really feel the energy from the local fans and how excited they were for me as well.

The day wasn't over yet, Superbike Race 1 was up shortly after! What a dramatic race this turned out to be with multiple red-flags and restarts. There were a lot of crashes right in front of me that I found myself dodging people and bikes sliding across the track. The racers were feisty today! On the final restart of the race, it was shortened to 8 laps, which is all we do at a club race! So, I was fired up knowing I could push as hard as I wanted for that race distance, which was half of the 16 were scheduled for. But with the red-flags and delays from them, they had to cut laps to stay on their live TV schedule. When the lights went out, I got a killer start, moving myself from row 5, up to 7th position! I ran 7th for quite some time, and I could see the top Superbike guys in my sights for quite a while, which was a brand-new thing for me! I was going fast turning 1:42's and putting in work. Corey Alexander got by me, and I tried to stay with him. With 2 laps to go, my clutch started slipping and my pace came down enough for Hayden Gillum to get by as well. I was going down the straightaways and it felt like I had half power. But I had a big gap on the rest of the field, and scored a 9th place finish, my career best in Superbike and my first official top 10 finish! I met my final goal of the weekend, to get that top 10. I earned a top 10 at the last round at Road America but was penalized two positions for passing under a yellow flag I didn't see. So, this was redemption for me!

Saturday was a perfect day, and it felt amazing to share it with everyone who was at the track. Like I mentioned, I've been trying to get back on the Stock 1000 podium for 4 years. I've been training hard, eating healthy, and getting a lot of medical attention to try to get my body in the best shape it can be so I can get these results. So, it feels so good to break through and get it done after all the effort that has gone into it after years of effort. 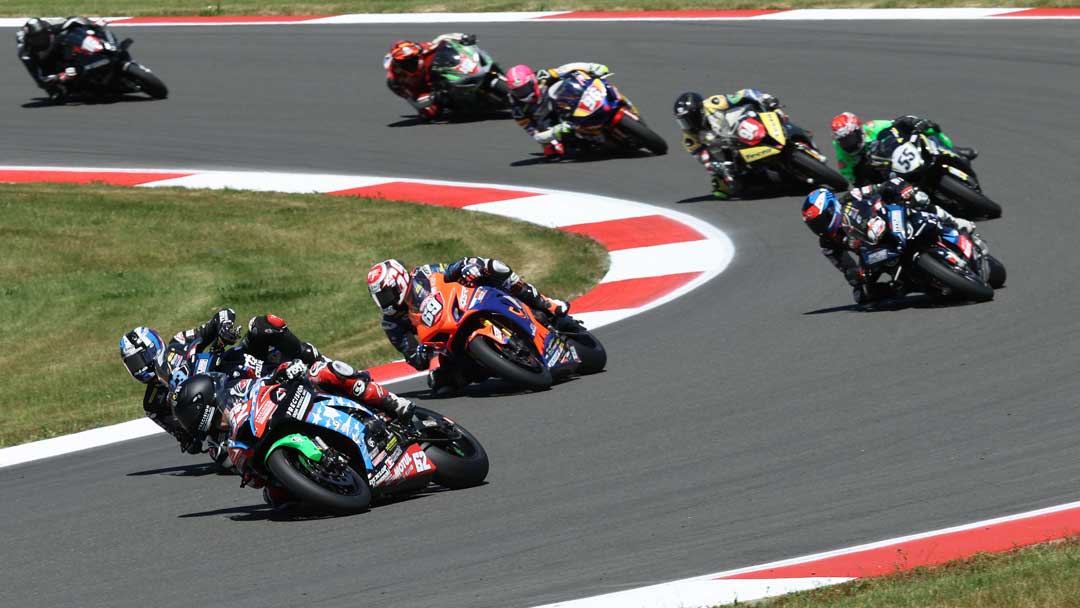 Sunday, I had to do it all over again. Another Stock 1000 race and Superbike race. I woke up feeling exhausted, almost ill. I could barely eat, and I couldn't wake up. Moments before I had to get on my bike and go out for Stock 1000 race 2, I was throwing up in the RV. When the race started though, I felt better and a holeshot into the chicane lit a fire under me. I led the opening lap which was quite the thrill and shot of adrenaline! I settled into 3rd place, chasing the leaders just ahead of me until the red flag came out on lap 7. The race was restarted, and I got the holeshot yet again! A 5-lap shootout meant people were going to get aggressive, so I had to push hard and ride smart. Corey and Hayden were absolutely going after it, and I found myself in 3rd again watching them battle, trying to see if I could find a way back by them. But a major problem was developing during the race for me. My bike was overheating. I started the race at 220 degrees, which is very hot. Normally the bike stays around 200 degrees or less. It climbed every lap, eventually making it past 250 degrees. At the end of the 4th lap, Travis Wyman passed me when my bike started losing power because of the heat. It was so bad, I didn't know for sure if I would even finish. I kept pushing, knowing anything could happen. And sure enough, something did. Hayden ran off track, which moved me back into 3rd! I barely limped the bike across the line. It felt like I was going 50 mph as opposed to 150mph. It was a heartbreak in the moment to have lost out on a podium spot due to a mechanical issue, but it was temporary, and luck swung back the other way for me to get that final position! Had the bike not overheated, we for sure wouldn't grabbed 2nd. But a 3rd was just as good for me! I got to stand on the podium again in front of everyone at my home race! This was truly icing on the cake for my team and me. 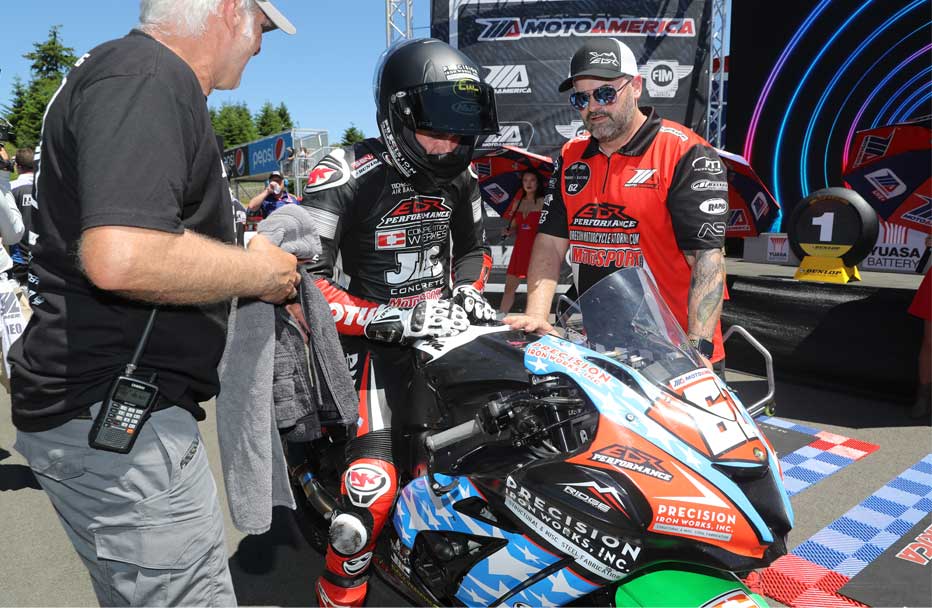 Eric from EDR got the radiator flushed and fresh water in it. The bike was ready to go again for Superbike Race 2. The temperature was the hottest yet, and the track was greasy. When the race started, things felt totally different, and I was struggling to ride the bike how I was all weekend. I was constantly sliding the front tire and getting chatter. I was running 11th place, and somewhere just after the halfway point, I mounted a charge against Dave Anthony on the M4 Suzuki Superbike just ahead of me. I ended up tucking the front wheel going into the super slow turn 13. It was the gentlest crash I've ever had. I was fine, and the bike was good too. But the bike was too hot to start back up at the time, and I retired from the race. A little bit of a bummer, but it happened at the tail end of the weekend, and there is almost no damage to repair. So, you couldn't really ask for more in that scenario! The weekend was over and what an incredible one it was. I was riding the best I ever had, and I think I accomplished even more than I dreamt of.

A big thank you to all of those who were there cheering me on, as well as those who watched live. Thanks to my Dad and Eric from EDR Performance for all the hard work in the pits this weekend to give me a great bike to race. Thanks to Waylon from Precision Iron Works for being my title sponsor at this event! Thanks to all my sponsors for everything, it means a lot!

I am busy getting ready for the Super Hooligans finale and the next MotoAmerica race at Laguna Seca in a weeks' time! Hoping I can clinch the Hooligan title, and that my ZX-10R will make it another race weekend. Right now, we are trying to come up with a game plan to find a new motor or build a new bike so we can race the rest of the series.

Be sure to watch the races at Laguna next weekend!