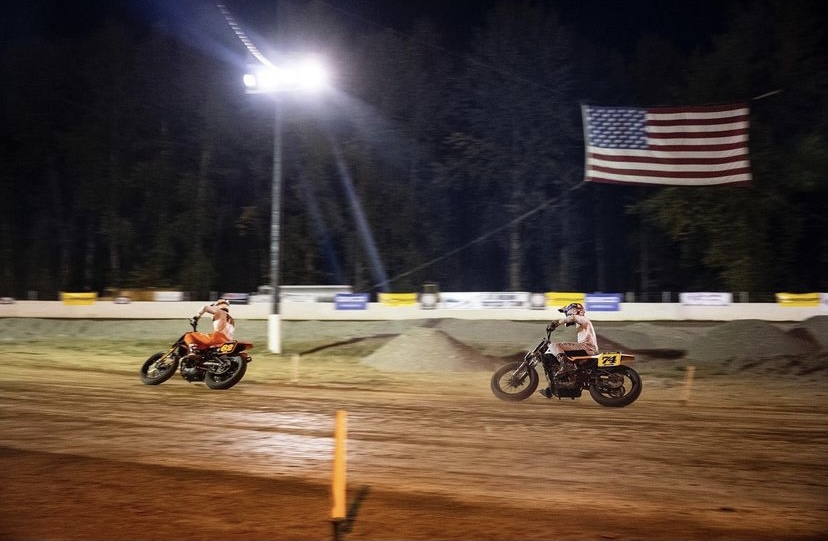 A schedule conflict was bound to happen this season with the many racing series I compete in. I missed a round of the Washington Motorcycle Road Racing Association (WMRRA) earlier in July because of a MotoAmerica / Super Hooligans race at Laguna Seca. I hadn't made a commitment to the full WMRRA season, but it was a bummer to have that conflict come up since I was leading the overall championship for the club. Super Hooligans made a late announcement in May that they were putting on the series this year and running that was important to me.

So just a couple of weekends ago now, another schedule conflict between Super Hooligans and the Oregon Motorcycle Road Racing (OMRRA) / WMRRA joint round came up. Fortunately, all the races were in Washington state! OMRRA/ WMRRA was racing at The Ridge Motorsports Park in Shelton, and the Super Hooligans race was running an hour and a half drive south in Castle Rock. With some strategic planning, I was going to attempt both in the same weekend.

Friday, I kicked-off the race weekend with some road race practice at The Ridge. Around 3pm my dad and I left the track and drove south to Castle Rock to catch night one of "The Wild One", which was the event hosting the second round of Super Hooligans. Friday night was a standard flat track oval race. It wasn't an official round for Super Hooligans (Saturday night was), but it was important I make the race to get some practice in since I had only ridden flat track twice in the last year and a half. In 2020, Super Hooligans implemented a 400-pound minimum motorcycle weight rule. I won the first round of the series and then the season got cancelled shortly after because of COVID-19. So, I never really got the KTM dialed in after adding over 60 pounds of lead to my bike to make weight! So, Friday we tested and made lots of setup changes. I ended up 2nd place to Scooter Vernon who is on a near identical KTM built by Savage Custom. Scooter is a former national pro flat tracker and a local at Castle Rock that I've raced before, and he made it apparent he was the man to beat. 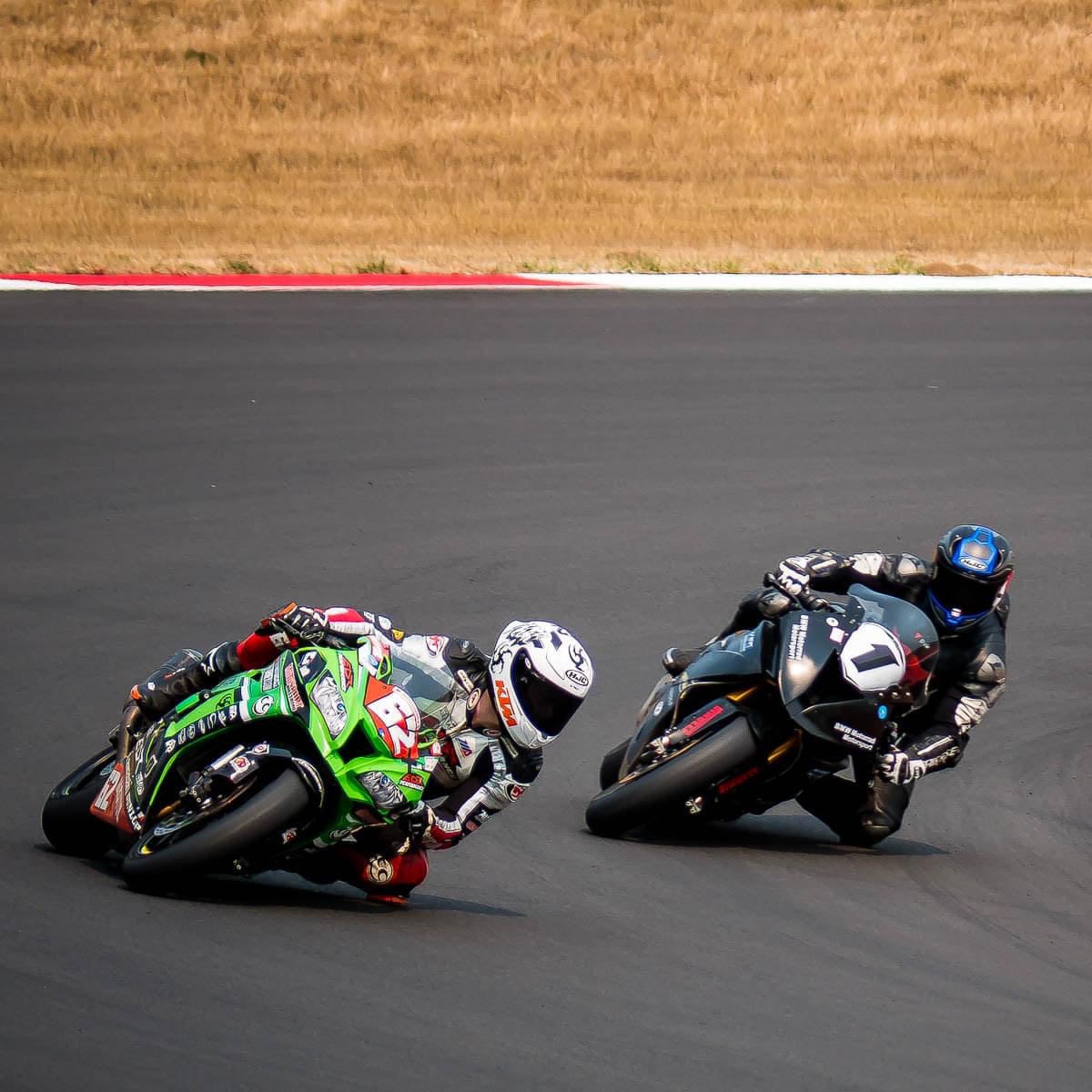 I got back to The Ridge around 1 am that night after the flat track races which always run late. I got a little bit of sleep in before waking up at 7am to get the road race bikes through tech inspection. I was racing my KTM 890 Duke R and Kawasaki ZX-10. I completed practice and qualifying, and my first race was Formula Ultra. I was able to get the holeshot and lead the race. WMRRA #1 Adam Robarts made a pass attempt into the ultra-slow turn 13 after the back straightaway, but I was able to undercut him and regain the lead immediately. Not long after, he crashed out while giving chase. I rode hard and smart, and took a large victory, extending my points lead in the class for both WMRRA and OMRRA! Both of us ran lap-record lap times in the 1:43's. But still a half second slower than my personal best I turned during the MotoAmerica weekend.

I usually also race Open Supersport on Saturday, but I had to leave the track early to make it to the flat track races in time for registration and practice. But before we left The Ridge, we had about an hour of work to do to my KTM 790 hooligan bike to get it ready. I washed it, changed the air filters, got new tires mounted by Dunlop, and had my dad do a shock spring change. My dad was crazy busy between working on all the bikes and making sure road race bikes were ready too. We made it back to Castle Rock around 4:30pm and had already had such a long day, and now, we faced a long night ahead.

I don't think I even did my heat race until after 8:30pm. The Wild One is a major event with a lot of racers and spectators, a half-time show and all sorts of stuff going on. I was able to holeshot and win my heat race over Scott Baker, brother of former Grand National Champion Brad Baker. Scott is another wicked fast local. I felt like my KTM setup was getting better, and I felt confident for the main event finally. I had really been struggling up until that point with the bike and my riding.

The main event eventually came around at midnight. It was the very last race. I snagged the holeshot over Scooter Vernon and was setting the pace before the red flag came out on lap 2. I was bummed, because it was going to be really hard to repeat the start I had. But somehow, I pulled it off again! Scooter was hot on my tail again, and we wrestled our 400 pound machines around the TT track! I was doing everything I could to keep him behind, but he finally got a wheel and elbow in on me, and we leaned on each other until he finally got through at the halfway point of the race. It was some hard racing, but really clean at the same time. Scooter had his bike working a little better than mine, and he was able to find grip where I couldn't to help him scoot away ever so slightly each lap. I brought it home safely to a 2nd place finish, which I was satisfied with! I rode hard and tried everything I could. And on the bright side, I took the points lead in the championship!

After hanging out for awards and visiting some friends, my dad and I left the track around 1:30am, and made it back to The Ridge at 3am. We got even less sleep this time before getting up to road race Sunday. I had 3 races to do, and I was running on about 4 hours of sleep. First race up was Formula Ultra, where I got the holeshot yet again, and was able to pull away from Robarts. I have felt so dialed in on my ZX-10 at The Ridge this year. I won every Formula Ultra race there this year which was a cool accomplishment for me!

My favorite race of the day, and maybe year was the Formula 2 race however. I did this on my KTM 890 Duke R. The KTM 890cc twin is a little slower than the 600cc and 636cc four-cylinder engine bikes, and it is less aero dynamic with no bodywork and flat handlebars. The one thing it has over the other machines though is torque. Since The Ridge runs the chicane for the motorcycle races, there isn't any large straightaways for the disadvantage of the KTM to really be at play that much. So, there was potential to finish on the podium with the bike I felt. To my surprise, I was able to get the holeshot. Last time I raced this bike against 600's at Portland International Raceway (PIR), they were able to power by me before the first turn, even though I got a better jump. But here I was, leading the race! Chris Sarbora was able to make a pass on me down the back straight and take the inside line going into turn 13. I rode my KTM harder than I ever had to keep up. For the first time, I was riding the bike at speed. I had turned 1:52 in one of the only practice sessions I had done on the bike, and in the race, I was turning 1:47's! I made a pass on Sarbora after I chased for a few laps. Coming down the hill and onto the front straight in first place had me laughing inside my helmet! Here I am on a naked bike, the only one in the field, beating the WMRRA #1 and #2 riders, who also hold MotoAmerica race licenses, and both are riding Kawasaki Ninja 636 machines with at least 10 more hp! Anyway, it was short lived because Adam Robarts powered by me the next lap. But I kept him honest, nearly passing him on the final lap into turn 13 and finishing 4 tenths of a second behind him at the line! It was a close race, and I was thrilled to put the 890 on the podium in 2nd place! The bike continues to impress me, and others.

Finally, my last race of the weekend was Open Superbike. I was going for a track record attempt, but unfortunately the sun wasn't shining, and the track conditions didn't quite allow for it. I got within a couple tenths of the record but fell short and completely trashed my rear tire. I got another win though and was finally done racing for the weekend!

Surprisingly, I felt pretty good all weekend long. Didn't really feel tired until later that night when I got home when it hit me hard. I was useless for couple days after recovering! But it was a cool feat accomplishing everything I did at both events on the same weekend. I hope I don't have to do anything that crazy again anytime soon though! I gained a few more grey hairs after that.

Things are looking good for the OMRRA championship. I am on track for my third #1 plate, and I am thinking about doing the WMRRA finale to wrap up some class championships. I am technically in the #1 plate hunt there, but their points system is different, and you pretty much have to race the 600cc classes in addition to the 1000cc to earn the plate. Both Robarts and Sarbora do both and are 1 and 2 in the overall standings, with me in 3rd. My KTM is only legal for Formula 2, and not 600 Supersport or 600 Superbike. So even if I go there and win all my races, I probably can't get the plate. But we will see! Anything can happen. I've only rode at Pacific Raceways one time over 10 years ago.

So, I will be learning a new track and have a tall order ahead. - Andy