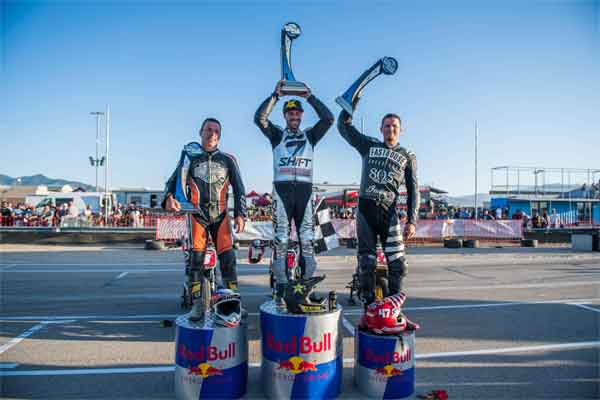 It's been another hectic stretch of travel for me. I recently went off on an 8-day long trip to Sturgis where I raced with American Flat Track aboard my Husqvarna FC450 and Super Hooligans on my KTM Duke 790.

In my first attempt of the season with no preparation, I was able to make the highly contested AFT Singles Main Event, and score my first ever top 10 finish against the best 450cc flat track racers in the world. My goal was just to make the 16 rider main, so to finish as well as I did put me on cloud nine.

To cap off the trip, I got a photo-finish 2nd place to Super Hooligan series rival Joe Kopp at the 7th round of the series. I was really upset about the finish actually, I felt I should have won that event. But redemption would soon come in Utah a week later.

I was actually supposed to drive to Salt Lake City with my Dad to leave the race rig between rounds, so we could just fly back and forth and save some driving. But after being so upset about the 2nd place finish, I wanted to bring the bike home to try to get some practice in before Nitro World Games. I knew ahead of time this event was going to be a supermoto style asphalt race, taking place on part of the Utah Motorsports Campus karting track. My Dad and I did some prep work, and I was able to go out to a local track I grew up racing Supermoto at in McMinville. I was able to cut about 60 laps. Having that seat time gave me some extra confidence going into Nitro World Games. Out of all the events this year, this was the single most important race for me to win in my eyes. Anything less would be a failure to me. I definitely put a lot of pressure on myself going into this one.

We got in to the event a day early to get setup. Utah Motorsports Campus is one of my favorite tracks. I've road raced on their main course a handful of times with MotoAmerica and other series. And I've raced supermoto there just as much over the last 10 years. My last visit to the facility was in 2016 with AMA Supermoto. Though we were running a small portion of the large kart track, it still played right into my favor and style. Getting to see the other athletes practice for their events such as Rallycross and FMX Quarter Pipe was very impressive. I knew it was going to be a special event! Nitro World Games is still a fairly new event, but already prestigious and one of the biggest action sports events in the world. Travis Pastrana is the brain child of the event. Pastrana is the ring-leader of Nitro Circus, which immediately gave Nitro World Games credibility in its first year. This year would be year 3 of the event. 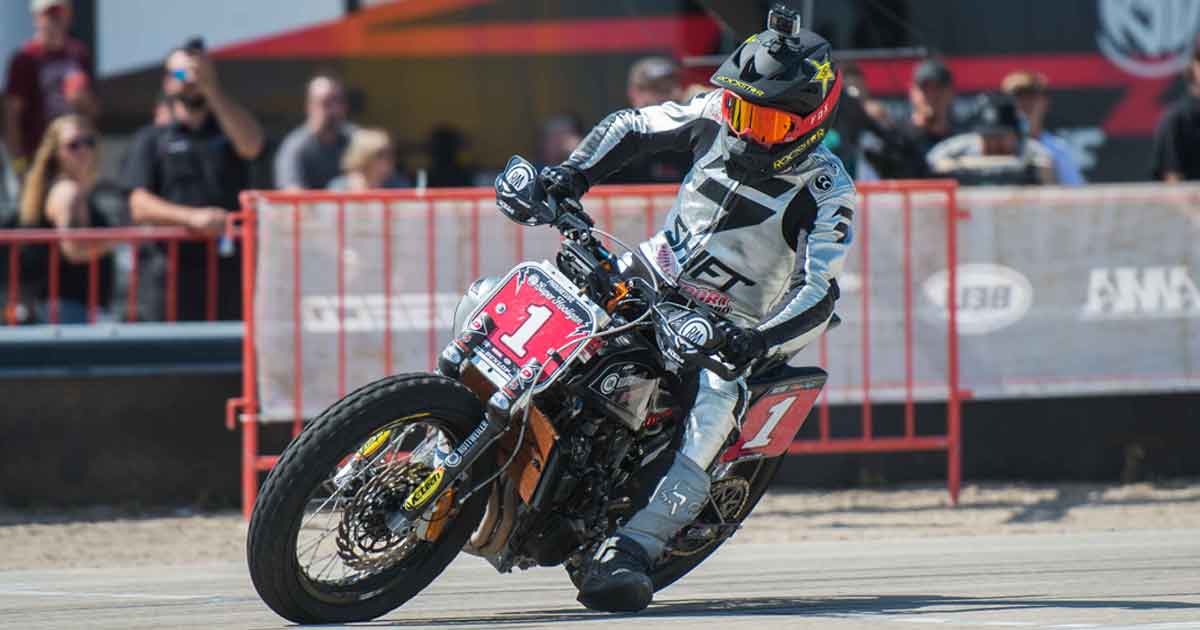 Saturday morning was finally here, and I barely slept. I was very anxious and nervous! We got a full hour of open practice, which was extremely nice to have. Typically we never get that at other races, so it gave us plenty of time to make changes. But easily for me, I didn't need to make any changes to my bike. I guessed the gearing correctly, and I felt amazing on my bike, and was faster than all my competitors. We jumped right into heat races after.

This program ran a little different than other races. Basically we were just running heat races so that the heat race winners (4 total) could advance to the Dunlop Dash-for-Cash. And then we'd have a 5 hour break before starting the program back over with Superpole Qualifying, where each rider goes out solo for 4 laps to try to turn their fastest laps. That would sort out all of the racers from fastest to slowest.

The top 12 riders would make the main event directly, and the remaining 12+ racers would race in the Last Chance Qualifier, where only the winner advances out in to the Main Event.

I easily won my heat race and earned a spot into the Dash, along with Joe Kopp, Jordan Graham and Frankie Garcia. I had the fastest lap time of the group, giving me pole position. When the green flag waved, I got the holeshot and was on the gas. I was about a quarter of a second faster each lap, so after 4 laps I won with about a second lead over Kopp. I won the $500 and the Dunlop tire! I got to do a victory lap before meeting the TV crew for an interview. The coolest part about this event was the fact there was full live coverage on Facebook and YouTube.

After waiting nearly all day for flat track to start back up and growing anxious and nervous all over again, all the other events concluded and Superpole Qualifying was underway. I was the 2nd to last rider to get to go out (Pastrana would go last) so I got to see all my competitors turn their best time. The pressure was building as I watched racers go out, especially the last few who were my biggest threats, but I knew I was fastest all day, so I didn't expect that to change really. I went out and took pole position by a tenth of a second over Kopp. I was definitely faster earlier in the day, and I had more grip before. But at 6:30pm in the day, it was the heat was at its peak, and the track had become a little greasy. 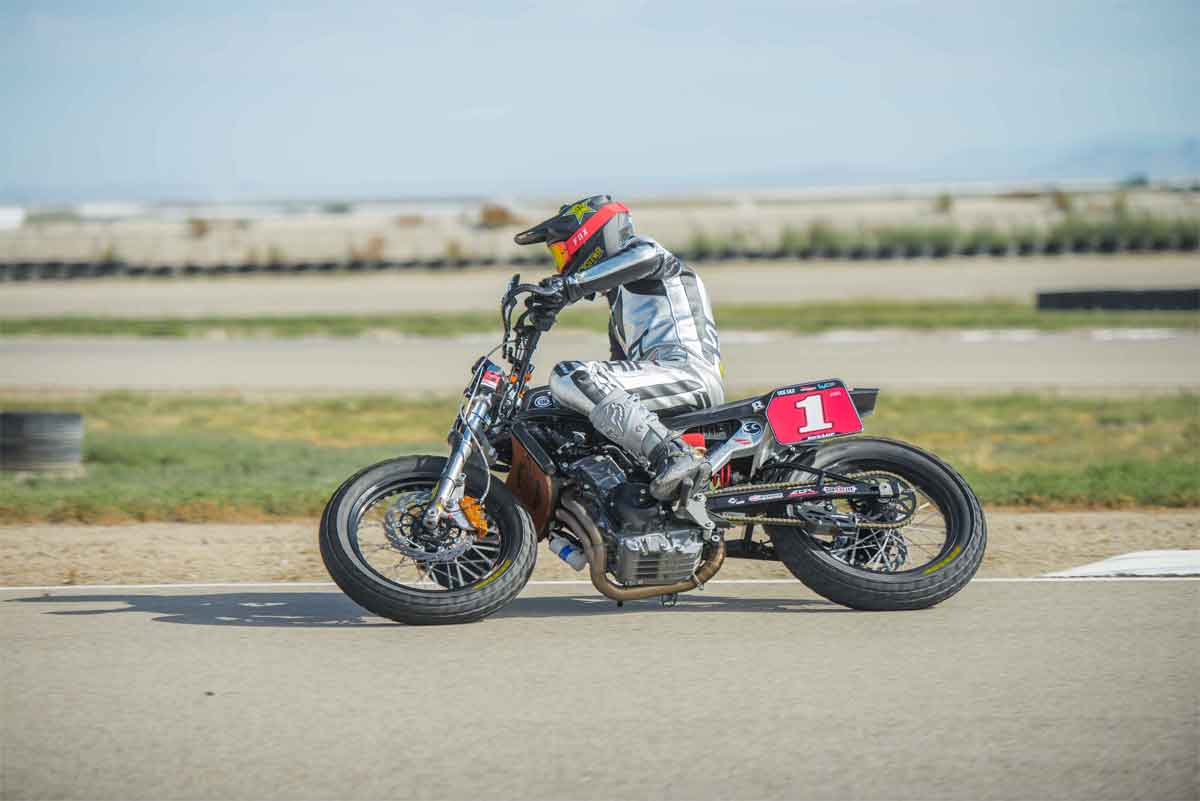 Finally, the moment I had been waiting for. The Main Event. I lined up on pole position, with rival Joe Kopp to my side. 13 riders filling the line. Fans packed in like sardines filling the sidelines yelling and cheering. And the announcer rambling over the mic. The flagger walked across the track, revs went up, and the flag waved. We roared off the line, and I found myself in first entering and exiting the first turn. The battle was on! Kopp was all over me. I had to thread the needle around the track. Grip wasn't abundant like it had been earlier in the day, and I wasn't as comfortable. I could feel Joe putting the heat on me. He had been working all day to improve his setup to try to beat me, and he had made some strides. I felt like I had what it took to maybe pull away, but I was fearful of throwing it away and crashing with the tires not gripping as good. I decided it would be smartest to manage a small gap, and do whatever it took to just not make any mistake that would give Joe an opportunity to pass. The laps winded down, and we started coming through lapped traffic. Fortunately, racers gave way, allowing us to continue on without any troubles. The white flag was insight. One more lap. I had felt a few surges from Joe where it felt like his front wheel was right on the back of my rear wheel. As I took the final lap, I felt some breathing room. I didn't hear the sound of his bike immediately behind mine. I came into the final set of corners and told myself "Just make it through. Just make it through."

And I did. I could see the checkered flag waving dramatically, and I gave a fist pump as I crossed the line to win the race! I felt so relieved, and so accomplished. The crowd cheered, and I took my victory lap once again. TV crew and photographers flooded the finish line where I met them and the other podium finishers for interviews and a podium celebration.

This win definitely was something special for me. I put in the work to earn it, and I had a wonderful support group at the track there for me. My Dad of course, who took me to the race and was there making sure my bike was ready. Travis Johnson of Savage Custom was there too, the guy who built my bike. It was awesome having him there to be part of it and support me. Keith from Rottweiler Motorcycle Co, my title sponsor, was there to share this as well. And my friend and teammate Stace Richmond, who made the main event by winning the LCQ. And my friend and sponsor Jeff from Toxic Moto Racing, local to Utah, was also there lending a hand. I couldn't have done it without these folks.

It was so incredible to compete in Nitro World Games and to have Travis Pastrana out there racing with us. I've looked up to him and a lot of the other Nitro athletes for a long time, so sharing the stage with them at this event is a dream come true to me.

I never thought I would get to be part of anything this cool before. - Andy